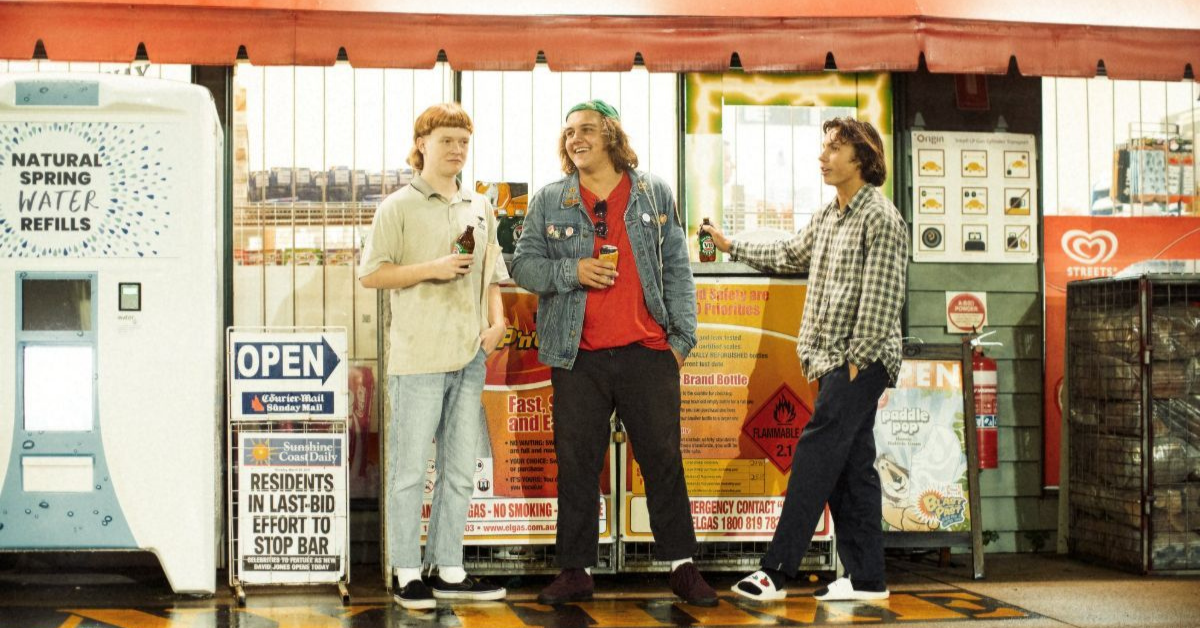 From humble beginnings on the Sunshine Coast, Australian punk-rock trio The Chats, garnered a staggering level of international attention since the popular hit, Smoko, went viral in 2017. The band’s relatable humour, entertaining visuals, and an iconic catchy chorus saw the video soar to almost 10 million views (at the time of this review). Having gone from rehearsing in a shed, to performing at some of the biggest festivals in the world in just a couple of years, the success of the young band is an astounding story already. Unleashing two EPs in the past four years, the band’s raw and lofi “shed rock” sound paired with the humorous larrikin-like lyrics, came to identify the trio as much as the iconic ‘ranga’ mullet. Upon the announcement of the band’s debut LP, High Risk Behaviour, fans could make a pretty educated guess as to what they might be hearing. Though the band still pull out their consistently hilarious humour, short and punchy songs, and bucket loads of energy, there is something so special combined with these and several other qualities in the album that make it, and the band, an iconic representation of the Australian music scene.

One of the biggest qualities on the album is the distinct influences running throughout. Several of the songs draw influences from classic punk-rock groups like The Dead Kennedys and The Butthole Surfers, which is especially noticeable on tracks like Stinker, Identity Theft, and 4573. The sound throughout the album feels like a tribute to a lot of these iconic bands, with The Chats flipping a lot of the formula and energy evoked in classic albums to bring a modern revival alive in their own mind. The group also act as conduits of Australian larrikin culture to the world, bringing quotable lines that local audiences are likely to hear in a Sunshine Coast pub to worldwide attention. It’s effective, stylish, and genuine. With rock legends like Dave Grohl, Josh Homme, and The Arctic Monkeys all showing their appreciation for the band on multiple occasions, The Chats have garnered a great deal of respect by being genuine to themselves, their fans, and their music. With ‘Ozploitation’ films already having huge influences on the world’s perception and attention to Australia, The Chats are the modern music industry’s equivalent. The music feels very involving, with punchy and simplistic lines becoming the perfect medium for a whole venue to sing along to. Though there isn’t as much variation in style as one could hope for on a full-length, the group isn’t trying to emulate other styles. They know what they are good at and they do it remarkably well. Each song in itself feels like a story or a rousing speech, and the content of the lyrics is very much left of centre, but effortlessly entertaining.

The blend of humour and energy that sits above simple, rousing instrumentation is consistent, but varied enough to make fans want to listen to the album multiple times. Listeners will soon find themselves yelling and jeering back lyrics in the same rambunctious and fun energy that makes the album great. The Chats have done it again, and certainly deserve an extra-long ‘smoko’ for their work.

The Chats’ debut LP High Risk Behaviour is out now.