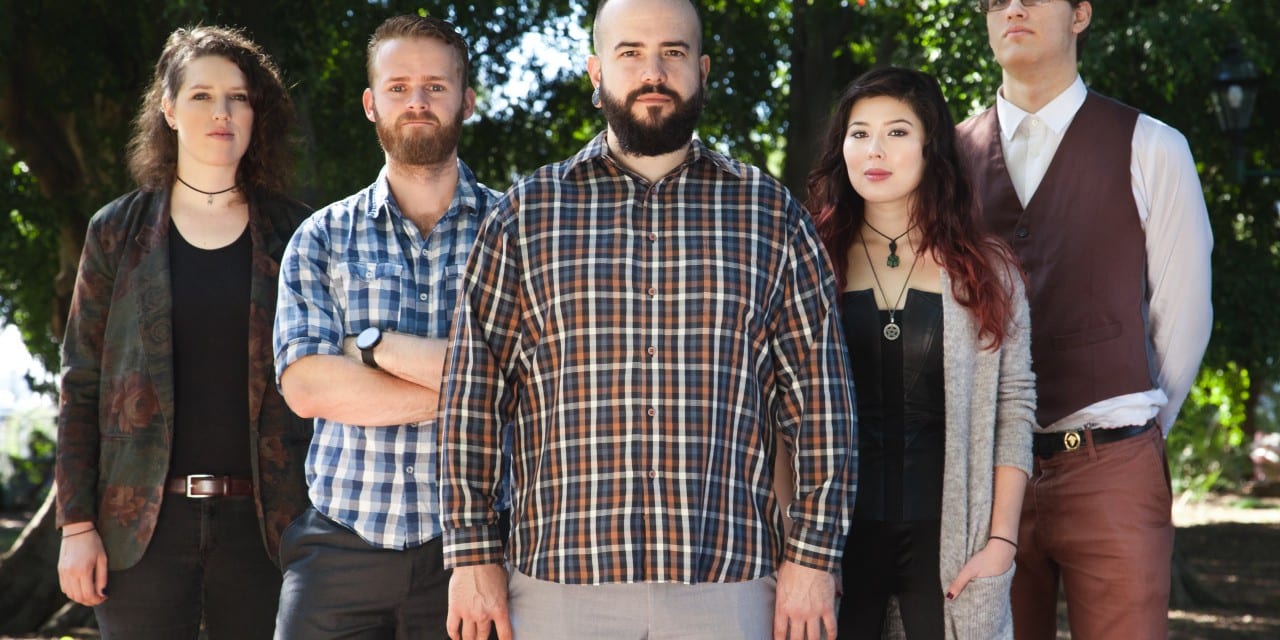 Colouring inside the lines of rock and folk music is eclectic Brisbane quintet Ocean Leaves. Originally the solo project of lead vocalist and guitarist Timothy Poitras, the full line-up came together in 2014.

With each member coming from a different musical background, ranging from jazz to reggae-funk, classical and garage rock, the band has managed to fuse their influences together to create an intriguing, varied soundscape.

“When we first formed we were all individually focused on different genres of music. We found our sound through jamming, and adding our own flavours to the existing Ocean Leaves tracks Timothy had recorded. As our music tastes continually evolve, our sound varies from song to song at times, depending largely on what we’re listening to,” said vocalist and drummer Christina Langham.

This change in sound is particularly evident between the bands two EPs – the first which Timothy released himself, and the second, Winter Heart, which they released together late last year. Timothy says the addition of new members and instruments has brought fresh interpretations and ideas to his song-writing that he wouldn’t have otherwise envisioned.

“Everyone contributes things I would never think of. Writing the single Yellowknife was the first time I’d ever revealed a song to other musicians when it was in such an unstable state, but everyone got in and brought it to life. That was a completely new experience for me,” he said.

The band had only been together five months when they started pre-production for their Winter Heart EP – a DIY production that was a major learning curve. After eight months of hard work, Timothy says playing to an eager audience at The Zoo for their EP Launch was a huge highlight.

“I’ve wanted to play The Zoo since I went to my first gig there. We had a hungry crowd and it hasn’t always been like that for us. We started out gigging anywhere we could, and it’s great to have found such a supportive scene here in Brisbane.”

Despite being repeatedly told that Melbourne is the place to be for music, there’s no place Ocean Leaves would rather be than here in Brissie.

“Brisbane’s music scene is surprisingly great. I say surprisingly because I nearly moved to Melbourne after constantly hearing that ‘Brisbane doesn’t have a scene.’ Those people are so, so wrong though! There is so much happening in Brisbane and we have a tonne of great venues – many we still haven’t played at yet.”

Christina says some of the venues they’d like to tick off their list are The Triffid, Black Bear Lodge, The Bearded Lady and of course the mighty Tivoli. The band are also hoping to release an album next year.

“I’ve wanted to make an album for so long, so I’m hoping 2016 is the year I finally write a big enough batch of songs to release a full-length record in 2017,” said Tim.

If there’s one thing you can expect musically from the talented folk of Ocean Leaves, it’s to expect the unexpected!

Listen to Ocean Leaves’ latest EP Winter Heart and stay up-to-date with the band’s happenings on their website and Facebook page.