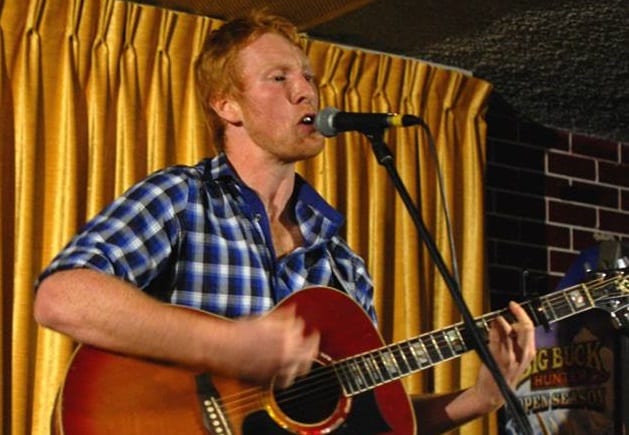 Charlie Stewart is keeping the spirit of rock n roll alive one gig at a time. Drawing on elements of punk, folk, pop and rock, he’s been entertaining audiences across Brisbane since 2013, and hopes to reach his 100 gig milestone by the end of 2016.

Learning to play the guitar at 12 years old, Charlie says the first song he taught himself by choice was Green Day’s American Idiot. He says Green Day’s music taught him to play strong rhythm behind his vocals, while their performance style encouraged him to maintain intensity and energy throughout his own shows. He also lists Bruce Springsteen and John Butler as major influences.

“Bruce Springsteen’s Nebraska inspired me to tell stories through my music, while John Butler’s famous instrumental track Ocean has shaped my playing more than any other song. That song taught me that playing with passion is so much more impressive than relying on virtuosity.”

Aside from musical influences, Charlie says one of the monumental parts of his development as an artist came when he helped organise a rock festival fundraiser at his high school. Although not everything went as planned, it was a learning curve that better prepared him for a career in music.

“A lot of things didn’t go as planned, the Living End never responded to my request for them to play the headlining spot (I shit you not, I still have a copy of the letter), but we put on the show of our lives and we learned a lot.”

He also received one of the best pieces of advice about surviving in the music industry from his high school music teacher.

“I was nervous about a performance at school and I remember apologising after singing the first song. Afterwards my teacher told me to never apologise because it makes you look unprofessional – that’s stayed with me ever since.”

He’s come a long way since then, playing multiple gigs around Brisbane and most recently scoring the headline spot at BTM Management’s upcoming February Showcase. While he admits headlining is a bit daunting, he’s looking forward to pushing himself and sharing his music with a wider audience.

For Charlie, 2016 is all about growth – he has his sights set on recording an EP, building his fan base and playing as many gigs as he can. So keep an eye out!