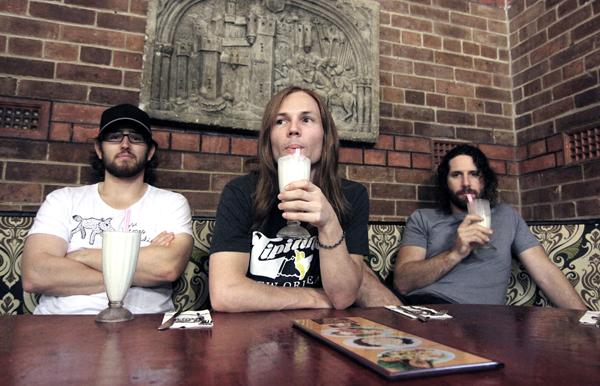 MofoIsDead are very much alive. With the release of their latest single Born Shit Die and their forthcoming EP Brisneyland, the progressive rock trio are ready to end the year on a high.

While some may only just be discovering MofoIsDead, the band have been making music for years, with lead singer Paul Galagher sharing his time between MofoIsDead and The Butterfly Effect. Although Paul is broadly recognised for his work with the latter, MofoIsDead is his main project.

“Despite giving it one hundred per cent, The Butterfly Effect feels like the side project in comparison to MofoIsDead. MofoIsDead is a more unbridled playground for me personally. They’re two very different bands mechanically, but I love them both for different reasons,” he said.

MofoIsDead’s music is certainly personal, often taking listeners on a powerful, questioning, and provoking journey through the dark depths of the human psyche. This is true of their new single Born Shit Die which makes a bold statement about the mundanity of life.

“Born Shit Die is just a fleeting snapshot of our purest frustrations. The chorus line is a phrase that Juddy will regularly blurt out whenever situations get overwhelming. I wrote the verses in about 30 seconds, just spewing brief thoughts like a disgruntled postal worker.”

Born Shit Die is a rousing introduction to the band’s soon-to-be-released Brisneyland EP. The EP houses a collection of tracks the band has had for some time, many of which will inspire people to question the meaning of life.

“Our only real vision for the EP was to be sincere and original at all times. We didn’t really have a plan musically, we just started writing and that’s what came out. The only plan we did have was to make the record entirely in Brisbane.”

With Brisneyland out 20 November, Paul says he’s looking forward to working on the next batch of songs and not starting sentences with “when this EP is done.” In true MofoIsDead style, the band will be celebrating the release of their EP with some pancakes and a milkshake. YUM.